Presentation EBS19: one out of 2 public tenders in Spain already requests some use of BIM 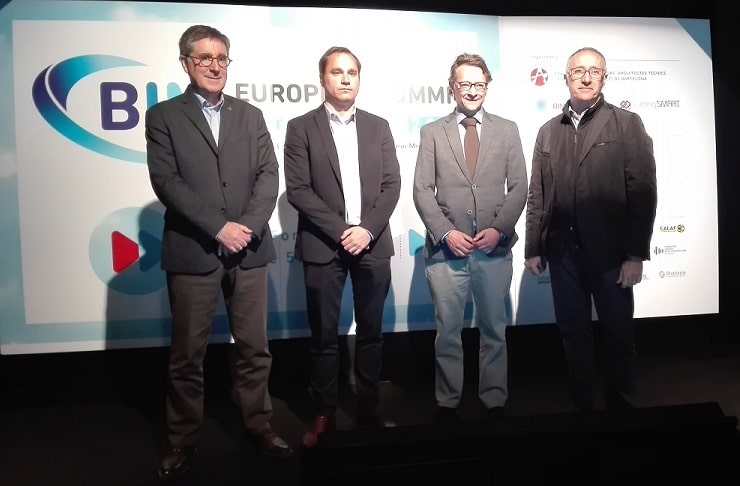 The president of the Col·legi d’Aparelladors de Barcelona (CAATEEB), Jordi Gosalves, has emphasized that one out of every two public tenders in Spain already requests some use of BIM during the presentation at the Roca Barcelona Gallery of the fifth edition of the European BIM Summit, which will take place on April 11 and 12 at the AXA Auditorium in Barcelona. Roca will be the main partner of the event for the fifth consecutive year, event which has already become a benchmark for BIM worldwide. The congress is organized by BIMAcademy, Building Smart Spain and tCAATEEB.

One of the most important moments of the European BIM Summit this year will be the presentation of a study on the implementation and impact of blockchain in the building sector that is being developed by a consortium of British companies. According to the content director of the congress, Ignasi Pérez-Arnal, this type of initiative is making investment groups progressively see business opportunities in the digitization of the sector.

During the presentation ceremony, Jordi Gosalves highlighted the importance of BIM in promoting construction that is “more efficient, collaborative, modern and respectful with the consumption of public, private and natural resources.” The president of the CAATEEB released some of the data collected in the fifth report of the BIM Bidding Observatory, which stresses that the investment proposed by all public administrations of the State in contracts with BIM exceeds 581.73 million of euros. Catalonia represents 47% of the tenders where this methodology is demanded, followed by the Valencian Community, with 15% and Andalusia, with 9%.

In addition, one of each two tenders made in Spain already includes some use of BIM, especially when presenting the documentation. Gosalves highlighted the importance of the Royal Decree approved by the Council of Ministers on December 28, which creates the Interministerial Commission for the Implementation of BIM Methodology in public procurement, which will also devotes resources to the promotion of the use of the BIM in the professional and educational field. For its part, the Generalitat published on 5 February an agreement that makes the use of BIM obligatory in certain public works contracts.

Xavier Torras, Brand & Communication Director of Roca highlighted that for Roca to support the BIM format means consolidating the company’s commitment to the evolution through quality and efficiency, thus becoming the company of reference in products for the precursory bath space in Spain by putting a stak on this new way of working from the start and now also one of the first in the world. Torras added that today Roca has more than 1,600 products developed with BIM and has more than 800,000 downloads of its articles.

One of the main developments of the next edition of the EBS Summit will be the presence of the Nordic countries (Denmark, Sweden, Norway, Iceland and Finland). According to the president of Building Smart Spain, Fernando Blanco, “these countries have a very advanced knowledge of this methodology and they are the ones who have spent more time working with it.” For Blanco, they represent “the ideal counterpoint of the prevailing Anglo-Saxon culture, which is very normative, but it is lacking in the daily application of projects that happens in the Scandinavian countries, where for years the BIM has ceased to be innovative, and it is seen as something normal” .

In this regard, the director of contents of the Summit, Ignasi Pérez-Arnal, highlighted the participation of the Chambers of Commerce of the invited countries. Pérez-Arnal thinks that “the financial world is looking at the construction sector with very open eyes because it sees many opportunities in the digital transformation of the sector.” An example of this change is the study that a consortium of 80 companies in the United Kingdom is conducting about the changes that the blockchain application will imply.

The program of the European BIM Summit will be completed with the BIM Experience, which will take place at CAATEEB headquarters on April 10 and will be open to companies and players in the production and execution of BIM. The same day and at the same place the BIM 4 Students will also be held, a specific session aimed at the future actors of the construction business: the students of professional and university training that will conform the thickness of professionals of the sector. A Talent Market will take place on April 12, with the aim of contacting companies interested in attracting BIM experts and BIM professionals.

***
About Roca
Roca is a company dedicated to the design, production and marketing of bathroom space products, as well as pavements and ceramic tiles for architecture, construction and interior design. More than one hundred years since its foundation, the company employs more than 23,600 people, has 78 production centers and is present in more than 170 markets spread across five continents.
www.roca.es

About the Col·legi d’Aparelladors de Barcelona (CAATEEB)
The Col·legi d’Aparelladors de Barcelona (CAATEEB) was established in 1940 and currently integrates a professional group consisting of more than 8,000 surveyors, technical architects and building engineers. In addition to the headquarters of Barcelona, ​​the CAATEEB is implemented in the province’s counties in through the territorial territories of Vic, Manresa, Granollers, Terrassa, Mataró and Vilafranca del Penedès. The institution is chaired by Jordi Gosalves.
www.apabcn.cat

About BIM Academy
BIM Academy was founded in 2013 with the purpose of helping to change the construction sector, providing experiential training and a specific consultancy to achieve full implementation of BIM processes in professional structures, corporate organizations and public entities.
www.bimacademy.es

About buildingSMART Spanish Chapter
Nonprofit Association that is part of BuildingSMART International and which has as main objective to promote efficiency in the construction sector through interoperability based on the use of open standards on BIM (Building Information Modeling) to reach new  levels in reduction of costs and time of execution and increase of quality.
www.buildingsmart.es