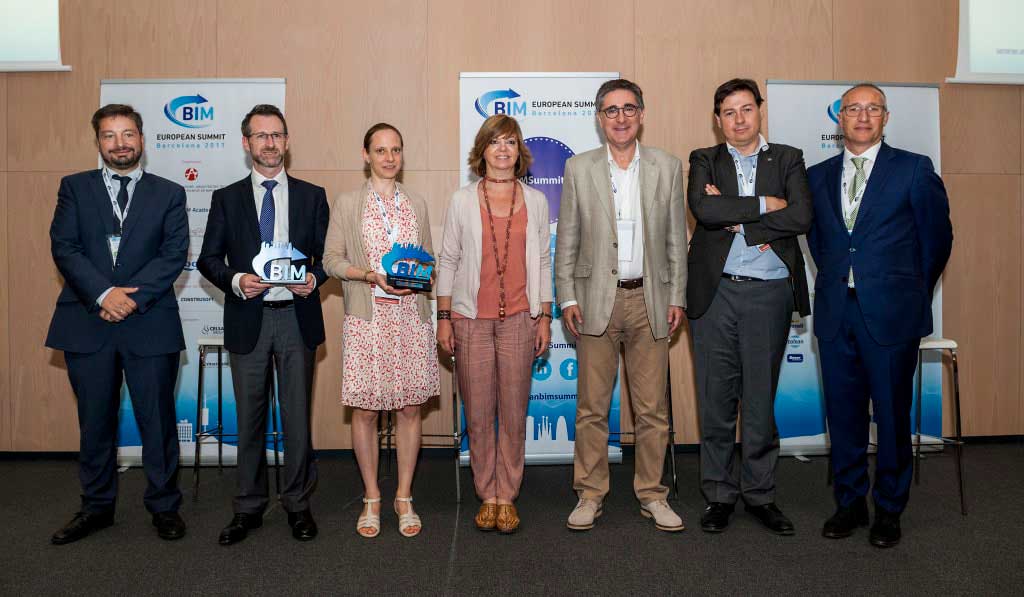 • The consellera of Interior, Meritxell Borràs, presented the BIM awards in the course of the closing ceremony
• The implementation of BIM in Spain has accelerated , although there are still importnat goals that have not been met such as the funding of national plans

The president of the Colegi d’Aparelladors of Barcelona, ​​Jordi Gosalves, announced the creation of a BIM European Observatory, involving the European and EU Summit BIM Task Groups, in order to monitor and periodically compare the implementation of BIM in Europe.

The announcement was made in the course of the award of the first EBS prizes by the Home Affairs, Public Administration and Housing counsellor of the Generalitat of Catalonia, Meritxell Borràs, event that closed the EBS17.

[gdlr_quote align=”center” ] the establishment of a true culture of efficiency and respect for the environment can not postpone any longer, based on the transparent co-operation among all actors involved in the life cycle of a construction project. Jordi Gosalves

The BIM European Observatory will issue similar reports like those wirtten by PISA on education, noted the president  of buldingSmart Spanish Chapter, Sergio González, who claimed that “this system of continuous assessment must contribute to the development of harmonized BIM countries in the European Union “.

The EU BIM Task Group has been one of the winners of this first edition of the prize, which has been shared with the Directorate General of Internal Market, Industry, Entrepreneurship and SMEs of the European Commission

The EU BIM Task Group is a European team whose scope aims to coordinate the efforts made by different countries in order to make them converge on a common approach in order to develop a competitive digital construction industry worldwide. The prize has been awarded for its pioneering work in the development and implementation of BIM in an orderly and harmonized manner in Europe as a tool for improving the competitiveness of the construction sector, as well asto  increase the efficiency of the cycle live of projects.

The president of CAATEEB said “we can not postpone any longer the establishment of a true culture of efficiency and respect for the environment, based on transparent co-operation  among all actors involved in the cycle life of a construction project”.

For Golsalves “it is necessary to ensure effective and responsible use of public and private resources, especially natural resources; it is our responsibility can not be delegated irresponsibly to future generations.”

In the same manner, the consellera Borras said that “in a world increasingly urbanized planning and urban design are increasingly important in tackling challenges such as global warming or to reverse and optimize natural resources; BIM can be a key tool for its ability to provide control and transparency projects”.

The organizers believe that in the European BIM Summit last year, all industry players, government and professional associations accelerated implementation of BIM in Spain, although there are still outstanding issues such as the funding of national plans.

In the period between the last two editions of the European BIM Summit, the new methodology has been used predominantly in the implementation of works and maintenance, although the degree of intensity of use has been different. Training programs have also been developed at various levels to provide knowledge to the industry and have established research and outreach initiatives such EUBIM, BIMtecnia or EBS.

As for the authorities, the BIM commission  in Spain has started to produce various documents for co-operation between industry players. In Catalonia, there has been continued work on the commission Build the Future, led by ITeCque, that has defined an action plan for the orderly implementation of BIM, and has created a croos section working group for the implementation of this methodology that has initiated the drafting of a White Paper.

Also noteworthy is the effort made by voluntary groups working BIM, such GuBIMCAT, which has created a system for the classification of great value which is GUBIMCLASS V1.

On his behalf, the EBS17 contents director, Ignasi Pérez Arnal, reported on the various activities that took place involving a total of 700 people. The guest country in the next edition will be Germany.

The third edition of the European BIM Summit was held within the framework of Barcelona Building Construmat, the International Construction Fair in Barcelona. Its organizers are the Colegi d’Aparalleadors of Barcelona (CAATEEB) and buildingSMARTSpanishChapter BIM Academy, sponsored by the company Roca.

***
About Roca
Roca is a company dedicated to the design, production and marketing of products for the bathroom space, as well as for wall and floor ceramic used in architecture, construction and interior design. The company has 22.6000 employees, has 78 production facilities in 20 countries and is present in over 170 markets spread across five continents. Its capital is entirely Spanish and the company is the market leader in Europe, Latin America, India and Russia. It also has a large presence in China and the rest of Asia, Middle East, Australia and Africa.
www.roca.es

About the Col·legi d’Aparelladors of Barcelona (CAATEEB)
The Col·legi d’Aparelladors of Barcelona (CAATEEB) was founded in 1940 and currently includes a professional group of more than 8,000 surveyors, technical architects and building engineers. In addition to the headquarters in Barcelona, ​​CAATEEB is implemented in all the territory through its regional offices in Vic, Manresa, Granollers, Terrassa, Mataró and Villafranca del Penedès. The institution is headed by Jordi Gosalves.
www.apabcn.cat

About BIM Academy
BIM Academy was founded in 2013 with the purpose of helping to change the construction industry, and providing an experiential training and consultancy specific to achieve full implementation of BIM processes in professional structures, corporate organizations and public entities.
www.bimacademy.es

About buildingSMART Spanish Chapter
A non-profit association part of buildingSMART International and the main objective of which is to foster efficiency in the construction sector through interoperability based on the use of open standards on BIM (Building Information Modeling) to reach new levels in reducing costs and execution time and increased quality.
www.buildingsmart.es